What is Textual Criticism? Very briefly and simply defined, textual critidism is the process used to ascertain the exact Words of the Bible’s original Old Testament Hebrew and New Testament Greek. Extreme methods are used by modernist and liberal teachers, as well as by new-evangelicals, and, sad to say, by some Fundamentalists, Reformed and Presbyterians.
Textual Criticism Brings Controversy.There is a great deal of controversy connected with textual criticism because of a baisc disagreement as to the methods of finding the original Hebrew and Greek Words. Again, in simple terms, there are two main methods in the approach to this subject. One method follows, to a lesser or greater degree, the principles laid down by Anglican professors Bishop B. F. Westcott and F. J. A. Hort. The opposite method follows, to a lesser or greater degree, the principels laid down by Anglican Dean John William Burgon who was a contemporary of Westcott and Hort and in the same denomination.
This Book Follows Dean Burgeon. The author of this book, Edward Miller, was a colleague of Dean Burgon. Because of this, he followed the method laid down in Dean Burgon’s books such as The Revision Revised,The Last Twelve Verses of Mark, The Traditional Text, and Cause of Corruption. This “Guide” might be looked at as somewhat of a summary of the principles found in the above four books by Dean Burgon. This book should be in everyone’s library as it is in defense of the Traditional Bible Texts. 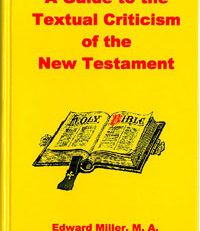 You're viewing: A Guide to Text Criticism of the New Testament by Edward Miller $10.00
Add to cart