The back cover of this book has the following quotes from book critics:

“…the literary style is a model of English clarity….”
“…the logic is beautiful….”
“…refreshing honesty pervades the entire book….”

These critics are not exaggerating! This book is one of the great masterpieces of Christian philosophy and apologetics. The flagship of Clark’s thought, it is brilliantly written and reasoned from beginning to end.

Religion, Reason, and Revelation is made up of five chapters. The first answers the question, Is Christianity a religion? Here Clark lays the groundwork from which he reasons. He covers the issues of what religion is, emotion v. intellect, the description v. presupposition, meaningful words, and what constitutes Christianity.

The second chapter deals with the relationship between faith and reason. Clark argues that the only true relationship between the two is a reason that is founded on faith. In his usual manner, Clark critiques natural theology, the cosmological argument, impiricism, irrationalism, and everyone from Hume to Hodge.

The third chapter covers inspiration and language, what the Bible claims, objections to inspiration, problems with linguistics, logical positivism, and the like.

The fourth chapter is Clark’s thought on revelation and morality. How can men know what is right and wrong? Is there a universal standard for ethical decision-making? What roles do experience and reason play in determining morality?

The final chapter is God and Evil, the perennial objection to Christianity. After explaining what he believes to be the biblical view of the problem of evil, Clark forcefully asserts, “Let it be unequivocally said that this view certainly makes God the cause of sin.” He further explains the law’s relation to both God and man, causality v. authorship, etc.

As one can see, Clark dives into each topic and discusses them great breadth and depth. Religion, Reason, and Revelation is a very thorough philosophical text.

While those unfamiliar with Clark’s thinking will find this book a most unusual read, I believe that those who think through his arguments will find them intriguing. He was certainly one of the most original thinkers of any era, and those who thoughtfully read this book will enjoy having their minds stretched and their beliefs challenged. 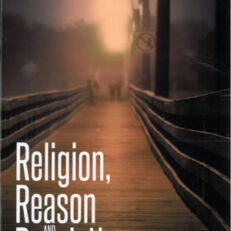 You're viewing: Religion, Reason and Revelation by Gordon H. Clark $9.00
Add to cart