The Burden of God – Michael Kelley

The Burden of God: Studies in Wisdom and Civilization from the book of Ecclesiastes, Michael Kelley

Nearly all modern scholars, liberal or conservative, readily classify Ecclesiastes as part of the “wisdom literature” of the religion of ancient Israel. To them this is the irst and by far the most assured thing that one can say about it. Thus it is mainly viewed as the accomplishment of the religious genius of a onetime great and illustrious people. With Proverbs, Job and the Song of Solomon, Ecclesiastes is said to belong to a special cast of thinking and utterance that made up one tradition that, in combination with other traditions, contributed
to the peculiar faith and values of the Hebrews. In other words, besides the Prophetic tradition with its prosecutory emphasis upon the law of Jehovah, and besides the Priestly tradition with its cult observances, we may speak of yet another tradition called “Wisdom” which early on (nobody can say for certain when) exercised an increasing inluence upon the “scribes” and gradually, over the course of a few centuries, grew into a distinct body of teaching having a major impact on the development of one of the great religions of ancient man. And, of course, by means of Judaism and Christianity that ancient wisdom has been passed on to us who have continued to reflect on its problems as well as its sententious prognoses for human experience in our own time. At least something along these lines is the way in which the wisdom heritage in the Scripture is seen by a Biblical scholarship too often controlled by the modern “enlightenment” spirit with its man-centered reconstruction of the Word of God. 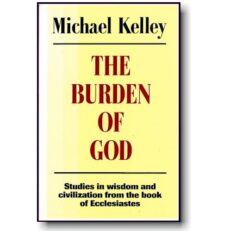