Now conservatively updated and given uniform modern spellings, with the addition of a historical introduction and glossaries, this New Testament as translated by John Wickliffe (c.1330-1384) in about 1380 A.D. is now available again.

John Wickliffe (c.1330-1384), often called ‘the morning star of the Reformation’ arranged for and assisted in the translation of the Bible from Latin into the current late Medieval ‘Middle English’ in about 1380 A.D. This version was revised and improved by John Purvey and others between 1390 and 1398. Circulated by Wickliffe’s ‘Lollard’ preachers at great personal risk, this version laid the groundwork for the later Reformation in the British Isles. This common ancestor of all English language New Testaments spans the gulf between the original Koine Greek, the Latin Vulgate of Jerome, and our modern English versions. Original medieval Lollard Bibles or Testaments are very scarce and only available to scholars today, whilst ‘Middle English’ is a foreign language to current English speakers, so this essential part of our Biblical history has not before been accessible in a readable typeface and understandable spellings over those six long centuries of the Church’s struggle and progress in the English-speaking world. Now finally conservatively updated and given uniform modern spellings, with the addition of historical Introduction and Glossaries, this New Testament is again presented to all who love the Bible in English. 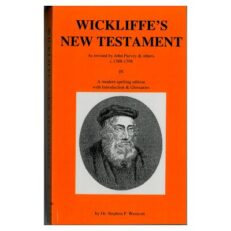