For thy truth’s sake: A doctrinal history …

For thy truth’s sake: A doctrinal history of the Protestant Reformed Churches (hardcover) Herman C. Hanko

Product Description
Seventy-five years of fighting for, maintaining, and developing the glorious heritage that is the Reformed Faith!

For Thy Truth’s Sake presents the history of the Protestant Reformed Churches in America (PRC) from this point of view. Not a mere relating of people, places, and events is the focus; rather, the emphasis is on the denomination’s faith and especially her battles to maintain the truth of sovereign, particular grace. It is a story not merely of survival in the church world, but of spiritual thriving and growth in the truth of God’s Word.

Indeed the PRC has paid a price for her commitment to the truth. For her faithfulness she is now despised by many and remains small in numbers. Nevertheless, by the grace of God the PRC continues and prospers spiritually in her life and membership as she celebrates her 75th anniversary in the year 2000.

Church history professor Herman Hanko has done a masterful job of presenting this fascinating history. It will be of benefit not only to the PRC’s own members, but will also give a serious witness to those outside the denomination-whether friend or foe.

It’s all here: the denomination’s doctrinal roots in the Netherlands, the struggles of the Dutch immigrants to establish churches in the new world, the controversies and battles that gave birth to and shaped the PRC, and most important of all, the blessed growth experienced by members of the denomination in doctrine and life. 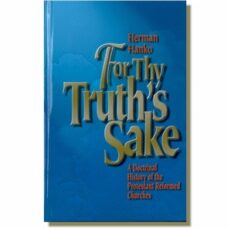